OK, so this is a bit of a personal situation one. I Own a Boom trike,Picture below.

Now I am not sure if the manufacturer is at fault here, I know that someone is, who has no idea of European weather and electrics. 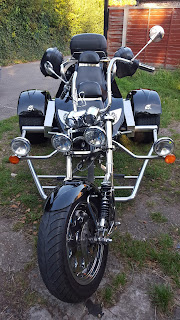 The Trike was fitted with a tow bar, by someone who knew more about welding thn electrics. They have caused problems since fitting.

Here are a few things that should have been considered on this trike, but were not.

Connecor blocks. Left exposed to the elements and not sealed with Tape, Silicone, or shrinkwrap.

Light fittings in the fenders, covered with a bit f plastic, which allows water round the sides thus rotting the metal fittings.

Fuses, in a setting so tight and Flat that it takes pliers to get at, and access is problematic.

Ok so it is Custom. But Custom does not mean Bodge.

Having said that, its not as bad as a Friend of mine who found that  the Electrics were all red wire, and platted.

So far I have used Silicon tape where ever I can to seal the connector blocks. Re wired one fender light system and fitted connector blocks because the wiring was not fitted with them. Rebuilt the internals of one light fitting because it fell apart when I looked at it. Well the internals came out when I took out the bulb.

Now the engine will not run. Averything else is working, but there is no spark. Bugger, must have disturbed something. Thing is, I have no wiring diagram, no experience on this type of engine. And no idea if it is something I did when rewiring the fender, or another problem that decided now was a good time to apear.

So, not being flush with monney at the moment, its down to me, any friend I can get to have a look, and praying.